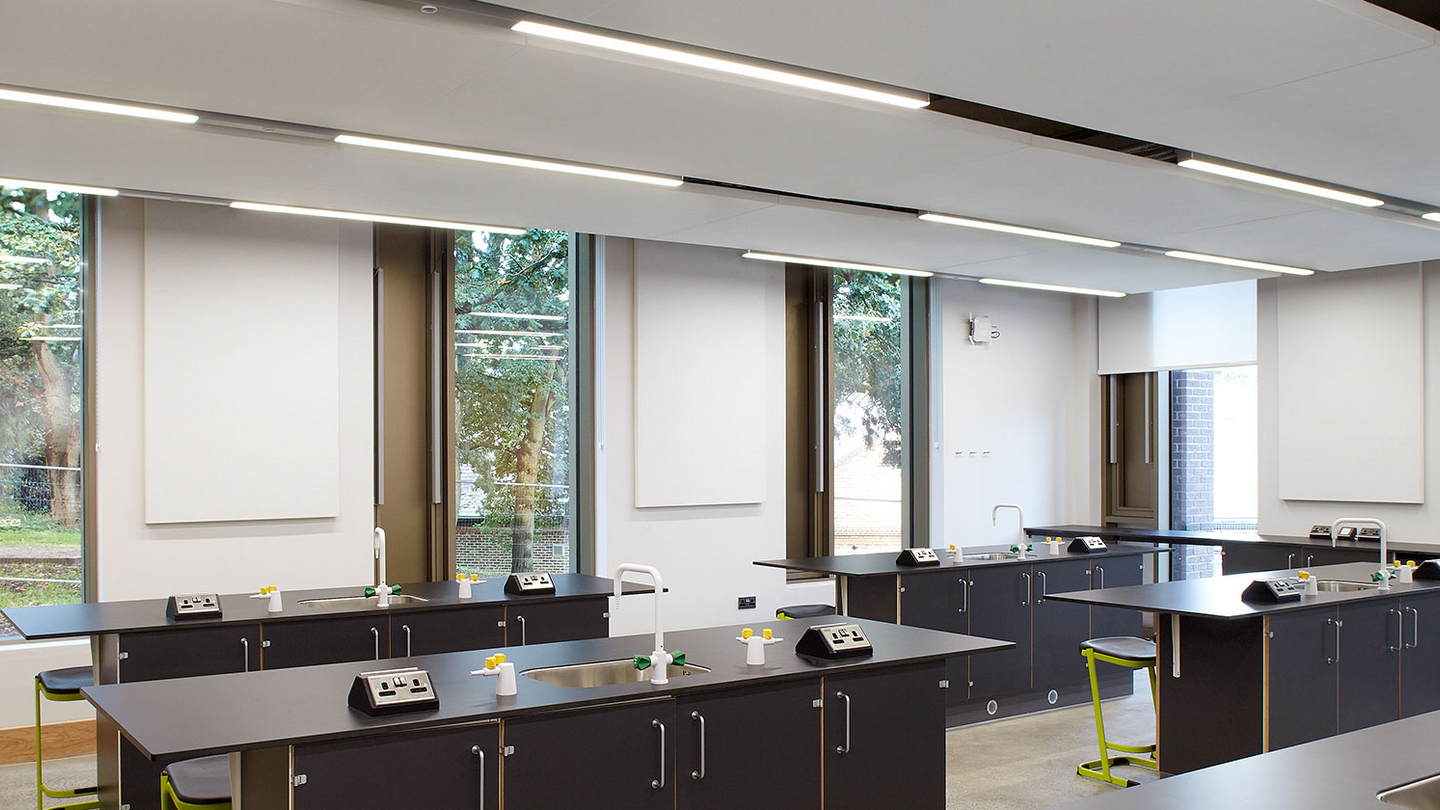 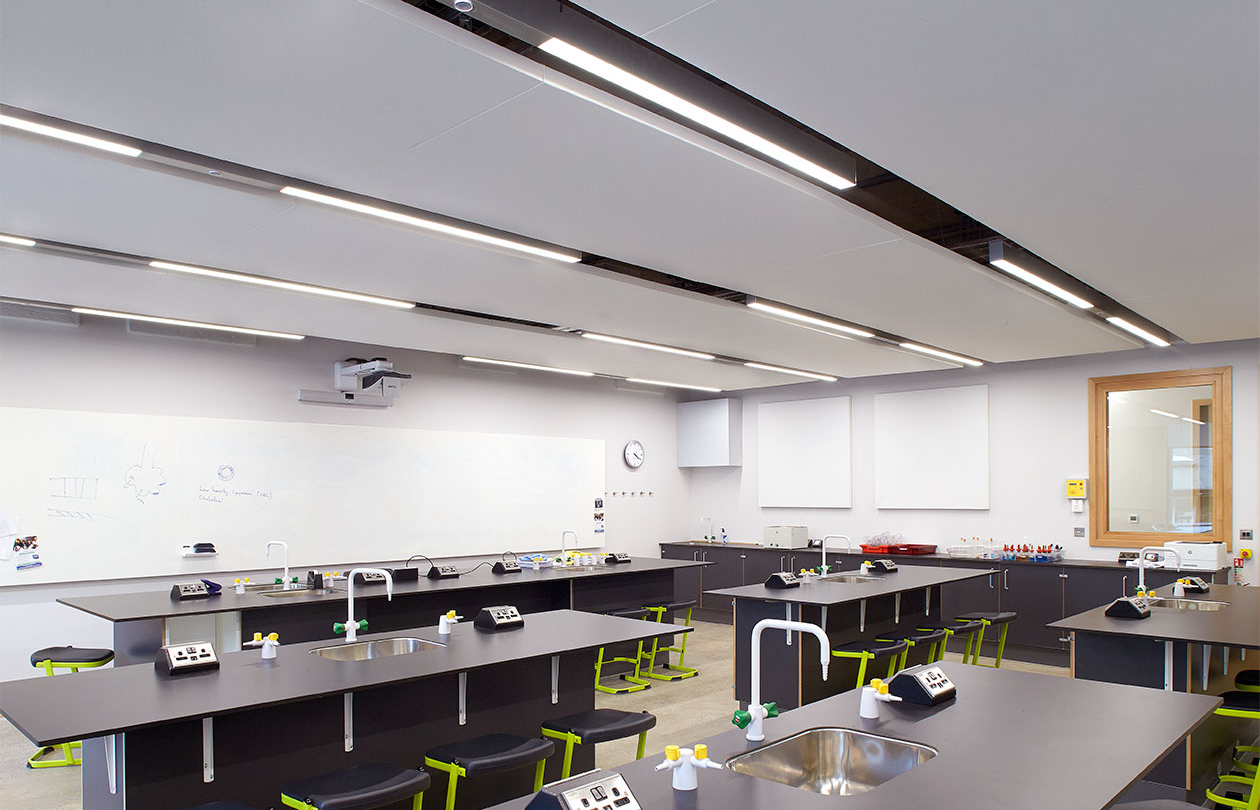 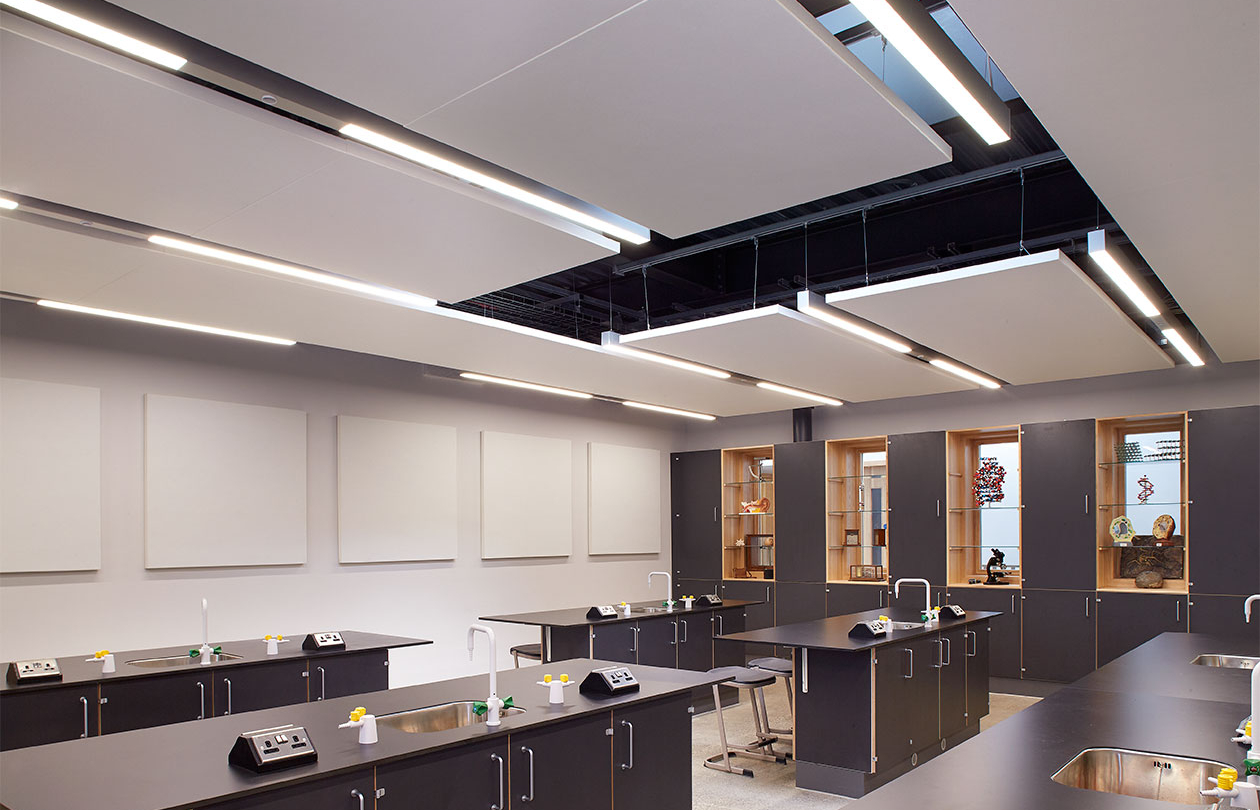 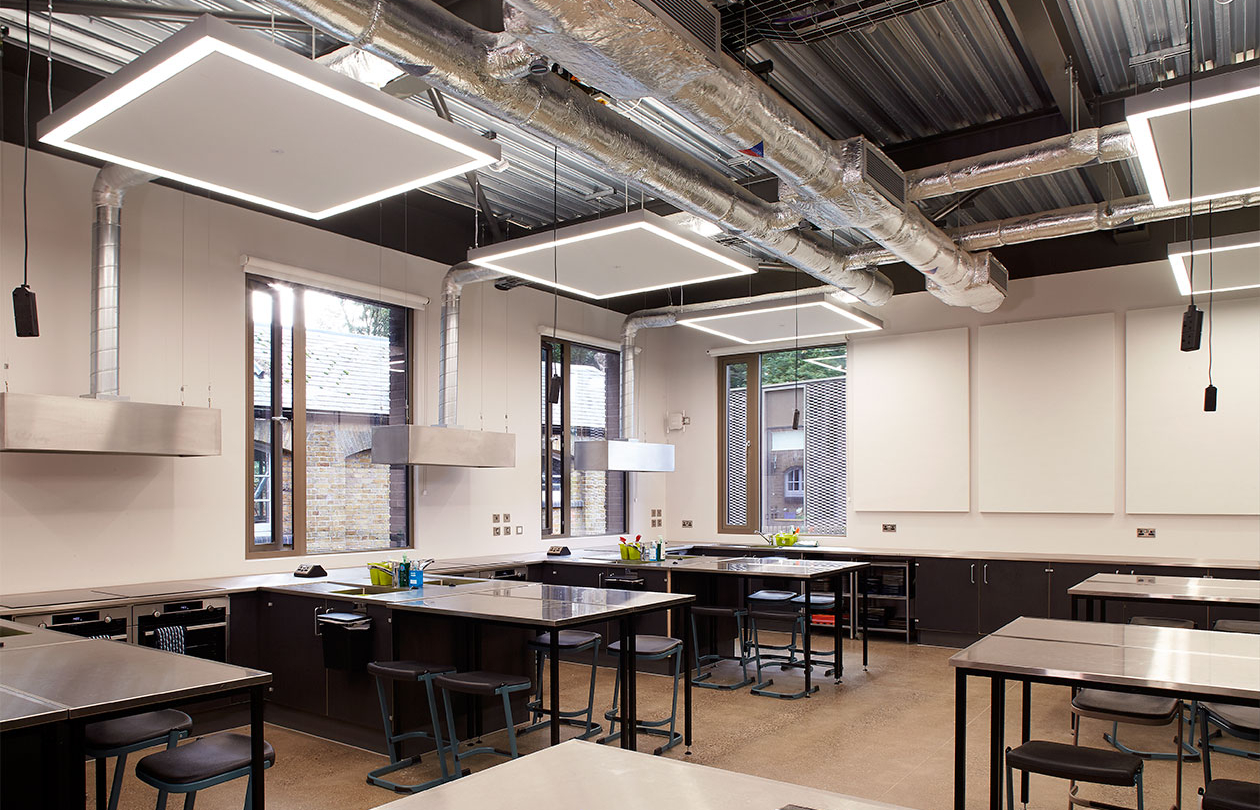 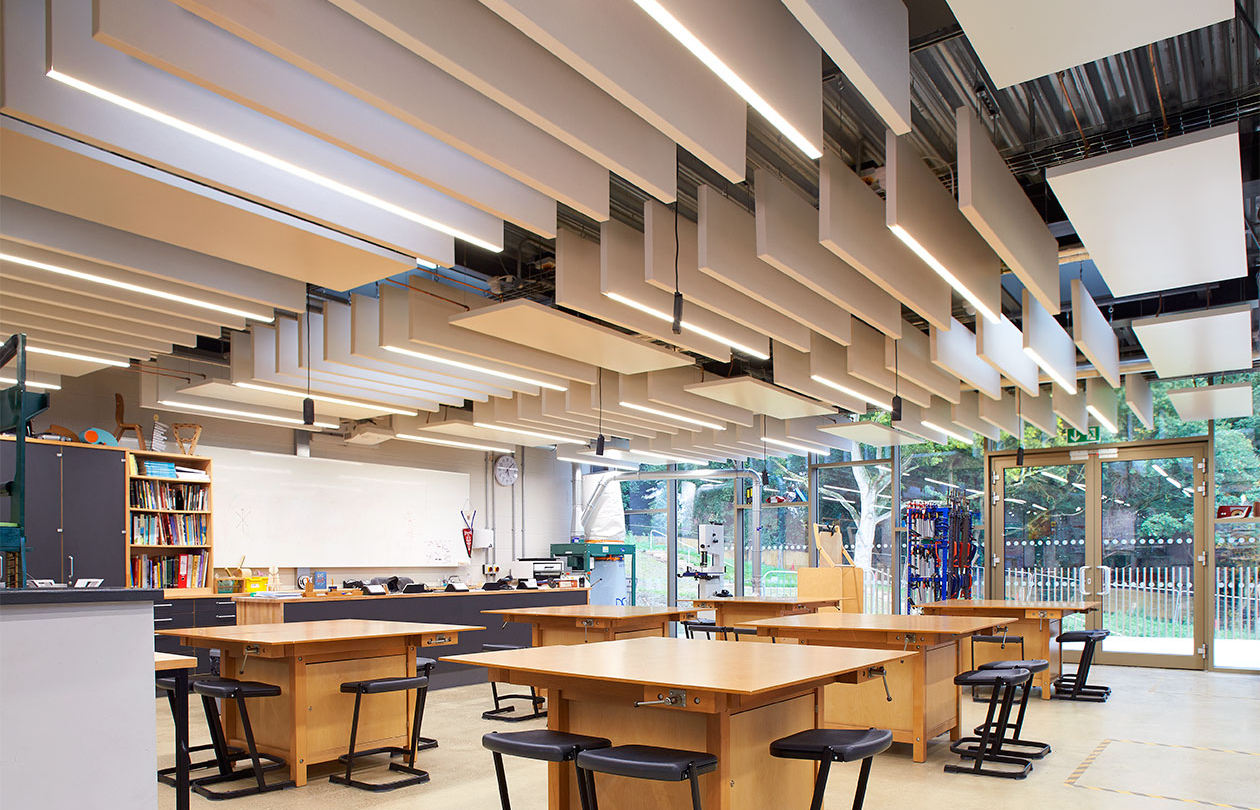 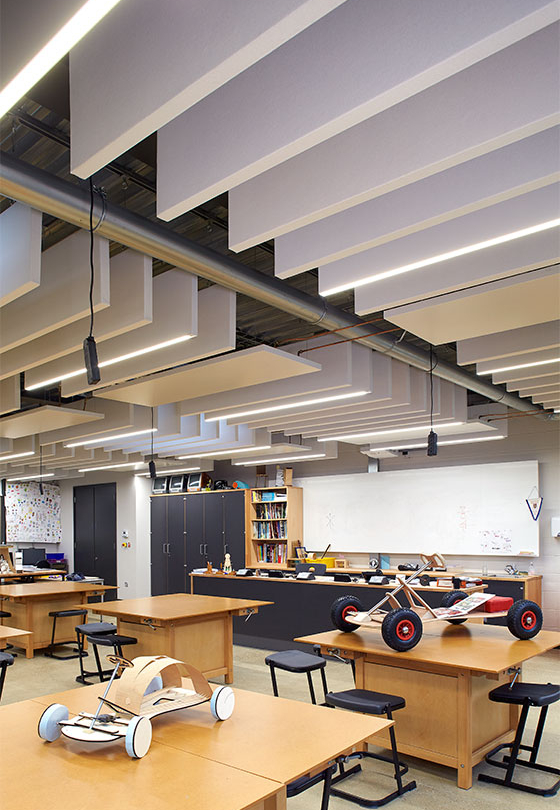 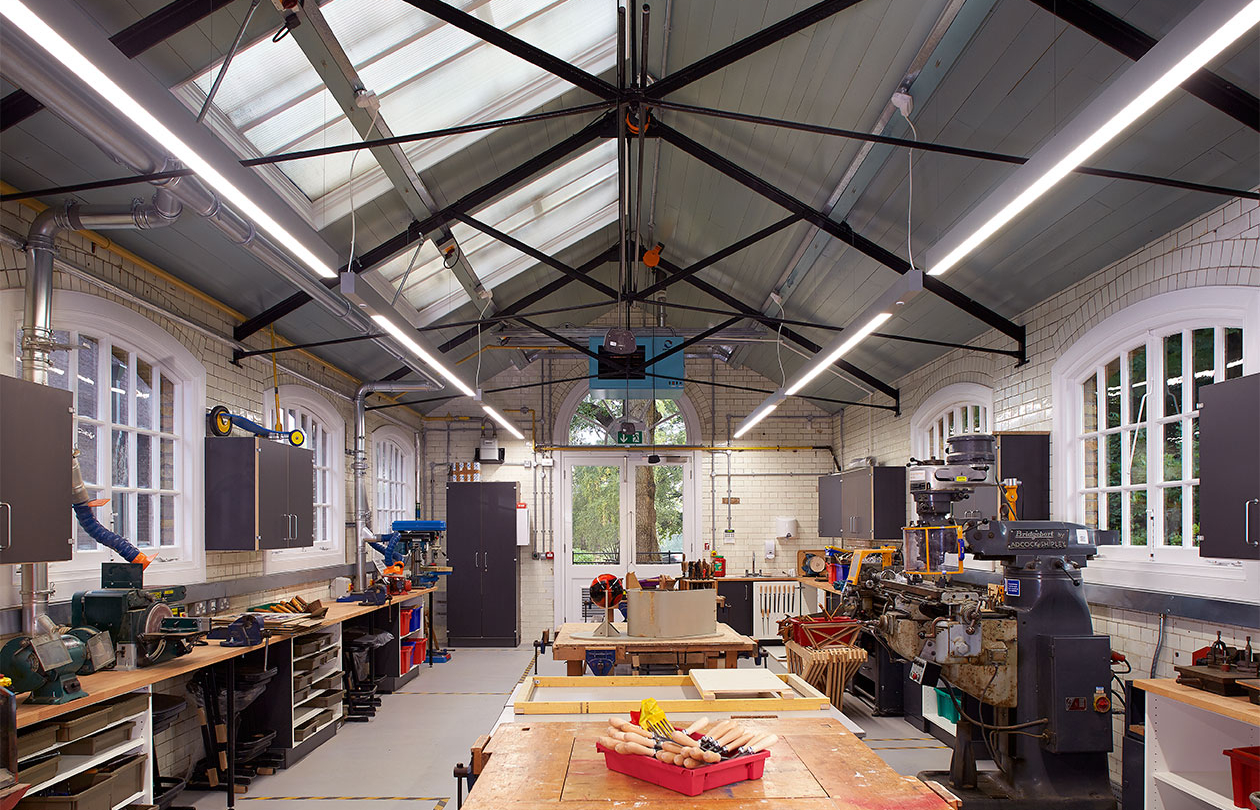 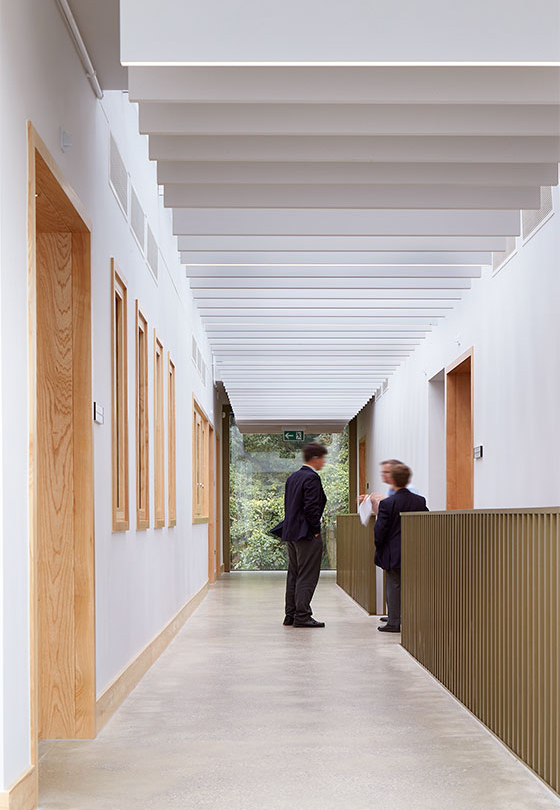 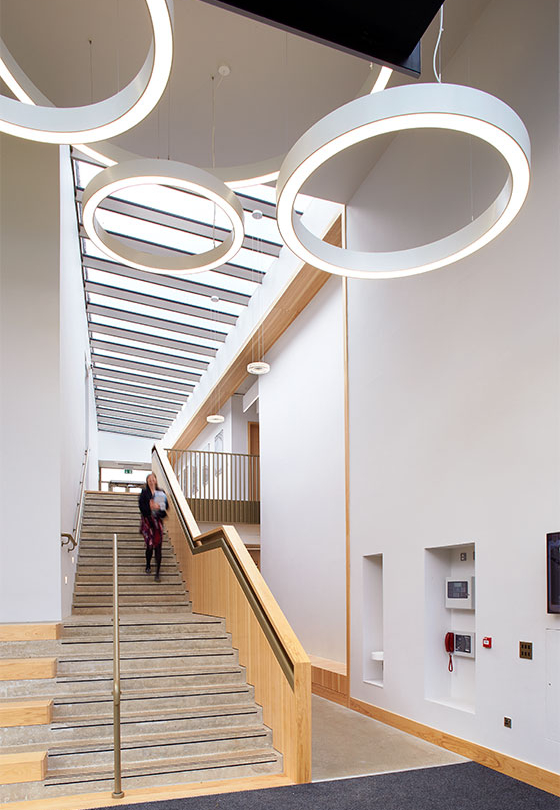 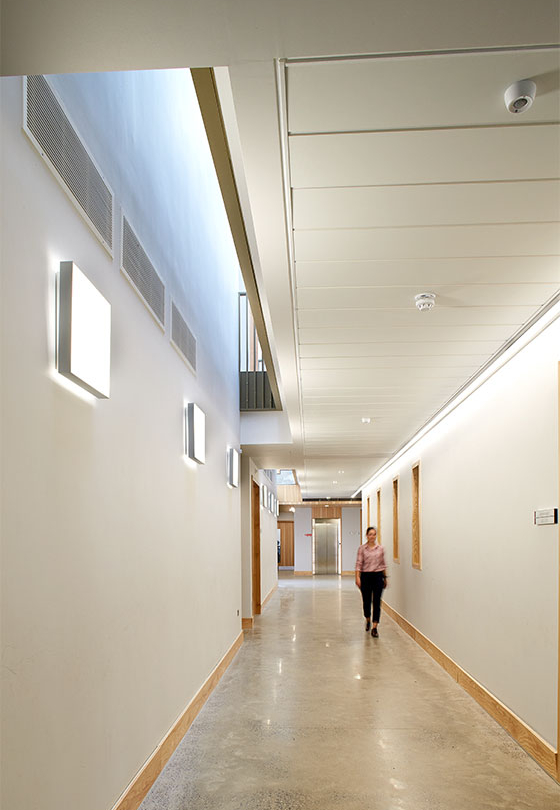 Spectral and RIDI group products have been used extensively on the inspirational new building at Claremont Fan Court School which boasts 13 new teaching spaces including 8 purpose-built science class rooms, a design and technology studio and workshop, a state of the art food and nutrition classroom together with an inspirational textiles space. The building was designed by Fletcher Crane Architects who produced the initial concepts and ideas for the lighting scheme. M&E consultants, Michael Jones Assoc produced the lighting design for the project using products mainly from Spectral but also from the portfolio of RIDI Group used throughout most of the teaching spaces. RIDI Group also supplied and commissioned the entire Lighting Control scheme for the new facility. The lighting design started with a display of H-140 suspended rings hovering over the atrium. Here one large version and three smaller orbiting ones were used in a staggered and overlapping layout. Further back, the smaller IRIS rings were suspended. Circulation areas were lit in differing ways. The main ground floor corridors featured a combination of wall mounted NOREA’s and a linear run of recessed H80 on the opposing side. This worked in combination with small light-wells of natural light. On the corridor above this was lit with our Acoustic Blade system which provided the main artificial light but also acted as a natural baffle for the skylights and additionally provided the necessary acoustics for such an area. The main science classrooms were lit using bespoke lengths of H80 luminaires with microprism diffusers either side of a solid integrated panel that housed the main light sensors. The lighting ran alongside large acoustic rafts. All classrooms feature scene setting controls for user comfort. Finally two individual workshop spaces were lit in entirely different ways. In the home economics lab, the ceiling services were exposed so square arrangements H80-Profil were suspended with solid acoustic in-fills which also incorporated the sensors and emergency lighting. The woodwork shop however was done in very different way with noise suppression being a key priority. Here the Blade system was used throughout with a high density of acoustic baffles.